What Is The York Distinguished Lecturer Series?

The York Distinguished Lecturer Series was established in 1984 through SHARE by an endowment from Dr. and Mrs. E. T. York, Jr. Each year, at least one recognized leader is nominated by faculty and invited to campus. The lecturers are individuals who have achieved outstanding international distinction in agriculture or a related discipline. The scholar is encouraged to spend a number of days on the University of Florida campus participating with faculty and students in lectures, workshops, and seminars. The lecturer also has the opportunity to establish a continuing relationship with the University as a visiting professor. The establishment of the series is in recognition of the proud contribution this university has made toward the betterment of mankind.

Erik Fyrwald is the CEO of Syngenta Group.

Shaping the Future of Sustainable Agriculture

Saving Plants, Saving Ourselves
Peter H. Raven, an engaging speaker with a vision for the future based on care for the living world, headed the internationally-acclaimed Missouri Botanical Garden for nearly 40 years. In 2001, he was awarded the National Medal of Science, highest honor for an American scientist, and last fall the Shenzhen Award in Plant Sciences at the International Congress of Botany, top award at the Congress. Come for an exciting talk!

Why We Should Trust Science (Most of the Time): Perspectives from the History and Philosophy of Science
Dr. Naomi Oreskes is one of the world’s leading historians of science. Dr. Oreskes is a Harvard University Professor of the History of Science. Her research focuses on consensus and dissent in science. She has won numerous prizes for her work, and has lectured widely in diverse venues ranging from the Madison, Wisconsin, Civics Club to the U.S. Air Force Research Laboratory.

GMO Technology: What do the Facts Say?
Dr. Alison Van Eenennaam is a Cooperative Extension Specialist in the field of Animal Genomics and Biotechnology in the Department of Animal Science at University of California, Davis. She received a Bachelor of Agricultural Science from the University of Melbourne in Australia, and both an MS in Animal Science, and a PhD in Genetics from UC Davis. The mission of her extension program is “to provide research and education on the use of animal genomics and biotechnology in livestock production systems”.

The Hockey Stick and the Climate Wars: Dispatches from the Front Lines
Dr. Mann, Distinguished Professor of Meteorology at Penn State University and author of “The Hockey Stick and the Climate Wars,” talked about the story behind the Hockey Stick, using it as a vehicle for exploring broader issues regarding the role of skepticism in science, the uneasy relationship between science and politics, and the dangers that arise when special interests attempt to skew the discourse over policy-relevant areas of science.

What Would E.T. York Do?: How will land-grant institutions navigate the next 150 years?
Senator Bob Graham is the former two–term governor of Florida and served for 18 years in the United States Senate. This is combined with 12 years in the Florida legislature for a total of 38 years of public service. As Governor and Senator, Bob Graham was a centrist, committed to bringing his colleagues together behind programs that served the broadest public interest. He was recognized by the people of Florida when he received an 83% approval ranking as he concluded eight years as Governor. Bob Graham retired from public service in January 2005, following his Presidential campaign in 2004.

“Cellulosic Ethanol — Ethanol from the Inedible Portion of Plants ”

“Research and Policy Priorities for the Global Food System”

“Animal Sciences in the Era of Systems Biology”

Spring 2006 York Lecturer: Dr. David B. Allison
University of Alabama at Birmingham Professor of Biostatistics, Head of the Statistical Genetics Section, and Director of the NIH-Funded Clinical Nutrition Research Center

“Agriculture and Rural Life in the Americas in the 21st Century”

“Ending Hunger in Africa: What Needs to be Done”

“Constraints on Growth in Agricultural Production”

“Agriculture and Natural Resources: A Vision of the 21st Century”

Agricultural Research at 2000: Can the Remarkable Agricultural Transformation Achieved in the 20th Century Continue?

“Ecological Economics and the Valuation of Ecosystem Services”

Chief Executive and Director General of the International Centre of Insect Physiology and Ecology, Kenya

“Problems of Global Hunger and Malnutrition–Was Malthus Right After All?”

“Food in a Changing World”

“From Wastelands to Wetlands”

“Benefit Risk Considerations in the Use of Pesticides”

“Life in the Dry State: The Physiology of Seeds”

“Sector as Personality: The Case of Farm Protest Movements”

“World Hunger: What to Do?”

Dr. E. T. York’s life exemplified the land-grant philosophy of using knowledge for the betterment of mankind. He devoted a lifetime of service to the land-grant university system and to

working as an advocate for the use of international agricultural development as a weapon against world hunger and malnutrition.

Fittingly, his career parallels the critical growing years of the land-grant institution—from its youth as life support for the nation’s agricultural producers into maturity as a complex, multifaceted university.

The Alabama native received both his bachelor’s and master’s degrees from Auburn University. He was awarded a doctorate in 1949 from Cornell University, where he studied under the tutelage of the internationally renowned soil scientist, Dr. Richard Bradfield.

While at Auburn, he married Vermelle “Vam” Cardwell of Evergreen, Alabama. Mrs. York was a leader in women’s student government at Auburn. Mrs. York retired as a successful businesswoman and real estate developer.

“A world filled with hungry, sick, and poverty-ridden people is likely to be an unstable world. The United States has a vital stake in the outcome of the war on hunger,” York said in a 1983 speech.

As provost of agriculture and vice president for agricultural, natural, and human resources at the University of Florida from 1963 to 1973, York effected major, far-reaching changes. In an effort to more clearly reflect the land-grant university’s unique, tripartite mission of teaching, research, and extension, York brought together the College of Agricultural and Life Sciences, the Florida Cooperative Extension Service, and the Florida Agricultural Experiment Station under the single administrative umbrella of the present Institute of Food and Agricultural Sciences (IFAS).

He established the Center for Tropical Agriculture, which extended the institute’s international influence. He initiated DARE (Developing Agricultural Resources Effectively), a long-range planning effort. Dr. York also founded SHARE (Special Help for Agricultural Research and Education), a UF Foundation program that raises private funds for agriculture. Over the years, SHARE has generated nearly $250 million through gifts of cash and other assets from thousands of donors.

After a period as executive vice president and interim president of UF, he served as chancellor of the State University System of Florida from 1975 to 1980. After 1980, he dedicated himself full-time to a wide range of activities related to the problems of world hunger and malnutrition.

Well-known for his community service, York received the Rotary International’s “Service Above Self Award,” the highest honor bestowed on Rotary Club members. Fewer than one one-hundredth of one percent (0.01%) of Rotarians worldwide are recognized with this award. 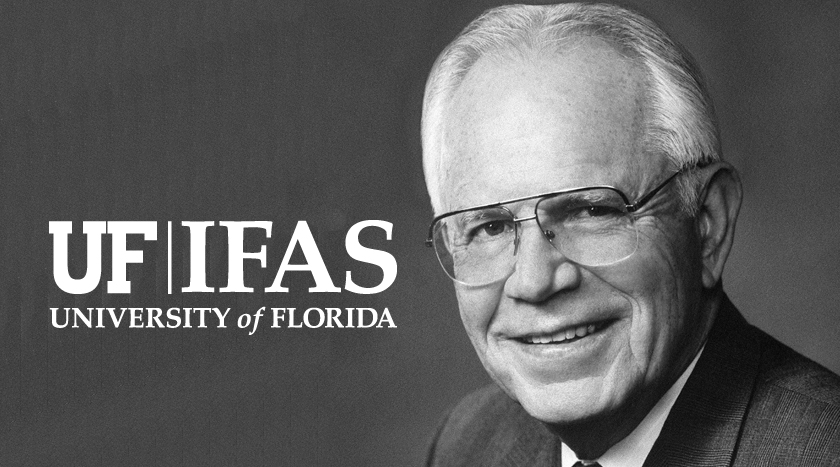 York authored of more than 100 technical papers and books, and he lectured at more than 40 universities throughout the U.S. and around the world. He was appointed to prominent advisory positions by Presidents Kennedy, Johnson, Nixon, Ford, Carter, and Reagan, by various foreign governments, and by a number of U.S. government agencies. Among his many honors, York received honorary degrees from UF, Auburn, Ohio State, and North Carolina State, and is a member of the Alabama Agricultural Hall of Honor and the Florida Agricultural Hall of Fame.

In 1997, York was named a Great Floridian by the Florida Museum of History in recognition of his notable contributions in shaping the state of Florida as we know it today. It was a great loss to the global agricultural community when Dr. York passed away on Friday April 15, 2011 at his home in Gainesville, Florida.